Ah, technology just keeps getting better. A few decades ago we were preoccupied with sending all sorts of objects and living beings to space and now well, we have shifted our attention towards more trivial and helpful technology.

What Google Home Can Do That Amazon Alexa Echo Can’t

Why Google Home Is Simply Better Compared to Alexa

The Google Home can use any Google services such as the Google Play music application. Due to this, Google Home has a much larger repertoire selection of songs. Google Home also is able to get songs from Pandora, Gaana, Saavn, and  Spotify, which just increase the number of songs exponentially. Last advantage of the Google Home in this category is that it is able to play a song based on the context because the Google Home is able to figure out what song you are referring to.

Alexa can use other services/providers but it mostly deters to Amazon music (Prime Music) which is newer and due to that fact, has a smaller selection to choose from.

A Google Home speaker is able to recognize two commands into a single sentence and perform them wonderfully. Let’s say as an example that you say “Hey Google, play Thriller and set the volume to 5.” This works with any Google Home command but sometimes you might have to switch commands around or to ensure that the wording is proper to start the command.

Well, where is Alexa on this matter?  Amazon’s speakers can only really handle one command at a time. Alexa is behind on the Google Home when it comes to being able to perform multiple commands from the get-go.

This is no surprise to any of us that uses Google every day! They have been collecting, analyzing, and utilizing all of our data with the help of technological “magic” to really understand their consumers. It is expected that the Google Home would perform vastly better than Amazon’s Alexa when it comes to answering questions correctly.  If you have younger children or are just a curious individual, this little robot helper will definitely serve you and your family use in the household.

Sadly, Alexa is only currently available in a female voice (figures, it is in the name), whereas the Google Assistant can be set to a male or a female voice, and it has six voices that you can choose from 3 men’s and 3 women’s voices.

The way the Google Home answers you

Often times, whenever Alexa does not know an answer it is more likely to simply admit that it has not been programmed or has the database to be able to answer your question “Sorry, I don’t know that one” or “I don’t like this one”.

The Alexa speakers sometimes will randomly say things that do not make sense, if you tell her to skip ahead in a Spotify music list once in a while she will say “Thumbs up and down are not supported on Spotify” because she was not really programmed to truly support that feature quite yet, Alexa is intended to prioritize Prime Music before suggesting anything else.

On the other hand, Alexa can only really be used as an assistant for the Amazon Echo speakers, Fire TV devices and Fire tablets. The way Amazon conceived their device is that there’s a downloadable application for Alexa for Android and iPhones but the application does not actually give you the access to the full Alexa experience but really only a simple control panel, the bare minimum.

Alexa can have a nice back-and-forth with the user interacting with it but when you ask other commands, Alexa might require to ask you further questions or instruction to really find what you were looking for initially.

On the other hand, the interaction that you experience with Google Home feels a lot more natural and in a strange way, human. Often times, you can ask additional questions that are based off the original question and things work out just fine! This gives a major advantage over Alexa as you can have much more natural interactions with Google’s devices.

Since Alexa and Google Home both rely on listening in on noises and voices, there has to be a way to either turn it off for a short period of time or to put it in a sleep mode, similar to the ones available on our computers and laptops.

Well, you are in luck but only if you are on team Google Home; it has the option to put the device on a night mode as to keep it from waking people around the house during the night. When you activate the night mode, the sounds will be vastly reduced and the indicator lights on the speaker will be dimmed. There is even a schedule that you can select the days on which it activates, the time it starts & ends, and the brightness & the volume level of the Google Home.

We definitely hope that you chose the right device and do not regret it, now, after reading this article! 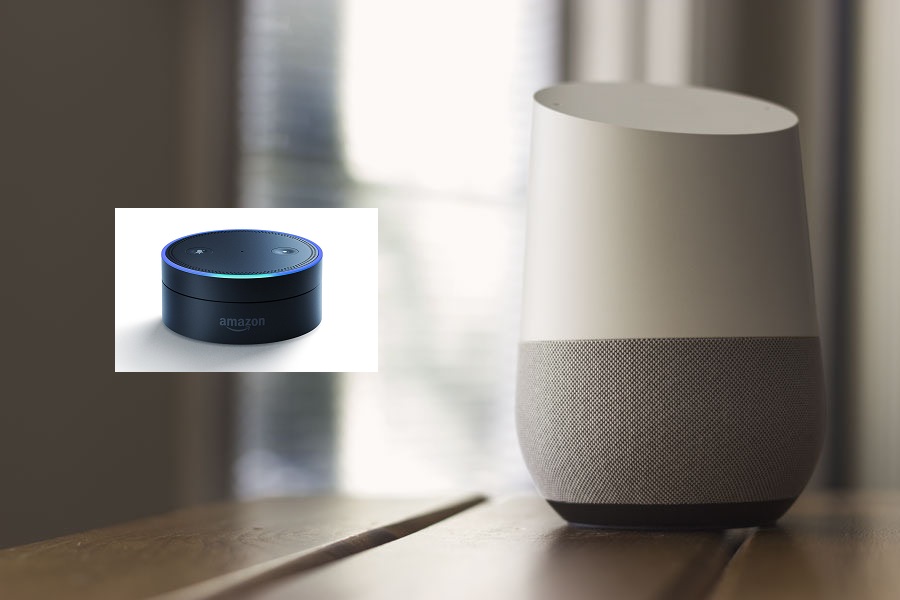 2 thoughts on “What Google Home Can Do That Amazon Echo Alexa Can’t?”